Blue Headed Pionus
Six months old. Were hand fed from 3 weeks until weaned. Handled multiple times daily. They reside in the living room. Two available.
This is an exceptional deal as most breeders/pet stores sell them for $600 - $1,000. Would consider "lay-a-way" for someone that needs another paycheck or such.
These birds are very playful and imaginative. They love playing with their toys. They hang upside down on one and rock it back and forth in order to get the bell inside to ring. They can entertain themselves and don't require the hands on attention many parrots need. But they enjoy cuddling, too. They are also much quieter than most parrots. They are working on learning some whistles and it sounded like one was saying up-up this morning. (From across the room I can't tell which one is doing what.)
1) Sammy - He was the one who invented the game of climbing up through a hoop in the cage. He is always the first to go check out new toys. He is also the "dunker". He takes the Zupreem pelleted diet we feed our birds over to the water dish and dunks it.
2) Red - He is very calm and checks things out. We've taken him for a ride in the car a couple of times and he's done really well. He seems to like watching the other traffic. He's the thinker of the bunch, but still playful.
Both are currently molting, but when they are done, and their blue hoods come in (when they're about a year old), they will be quite striking.
For more information call or text: seven 55-six714

Blue Headed Pionus babies $850
These are lovely colorful hand fed babies. Small generally quiet parrots. Many will talk at least a little. They will... 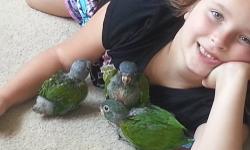 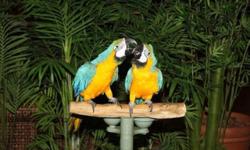 Blue Headed Pionus $450
I have one single unpaired male available. Coming up on 8 years this June. Ready to breed. Have had him since he was... 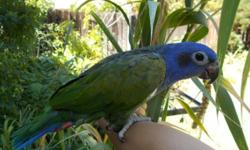 BLUE HEAD PIONUS
Blue head pionus parrots he is under 5 years old, He got good plumage. He is very friendly n sweet i can pet him on... 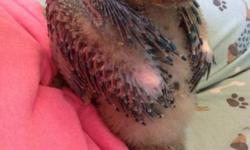 Animals in: Blun
Copyright © 2021 animalsnstuff.com, All Rights Reserved. Designated trademarks and brands are the property of their respective owners.
Home | Ads | About | Place an ad